London: the citizens of Trieste demonstrate to apply current International Laws in the Territory and Port of Trieste

07/10/2014
Home » Development » London: the citizens of Trieste demonstrate to apply current International Laws in the Territory and Port of Trieste
Email
Print

About 150 citizens of Trieste demonstrated yesterday, 6 October, on the streets of London, under the rain, for several hours, in order to raise awareness about the unsustainable legal and socio-economical condition of the city, Territory and Free Port of Trieste.

The demonstration continued in front of the Italian embassy, in order to protest against the continuous and reiterated illegal administration of Trieste by the Republic of Italy, which chose to blatantly ignore its International obligations deriving from the 1947 Treaty of Peace which, being imposed to Italy after World War II, removed Italian sovereignty from the Territory of Trieste (according to Article 21.2 of the Treaty). This Peace Treaty is still in force.
The sovereignty over the Territory of Trieste therefore belongs, today, directly and only to the citizens of Trieste themselves.

Furthermore, the Republic of Italy is violating the Human and Civil Rights of the citizens of Trieste, not only by neglecting the Fundamental Right of Nationality (as in the Universal Declaration of Human Rights, Article 15), but also with targeted repression.
The Italian authorities in Trieste recently published, in fact, the astonishing request for 45 days of prison for 37 citizens, randomly picked over thousands during a peaceful and authorised demonstration and accused of an old fascist crime, “Seditious gathering”.
This happened for no practical reason, but just for having clearly and publicly stated their ideas, in favour of legality in Trieste and its Free Port.

These conditions of illegal administration and repression – especially after the largest demonstrations in decades have been organised on this subject – can not continue and are in no way sustainable for the citizens of Trieste.

We also demonstrated at the embassies of two permanent members of the UN Security Council, the United States of America and the Russian Federation, in order to raise awareness about the direct rights these two countries have over the Free Port of Trieste, as signatories of the aforementioned Treaty of Peace, as well as to let the Russian and American governments know about the unsustainable economic depression that Trieste has been facing for decades, having lost almost one third of its population. This depression is a clear result of the constant violation of the current International Laws about Trieste by Italy. 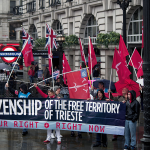 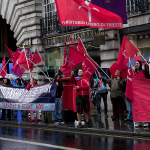 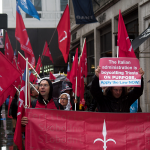 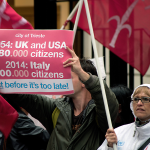 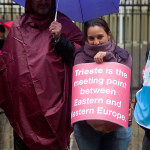 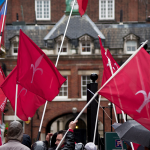 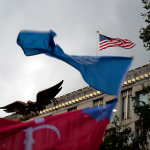 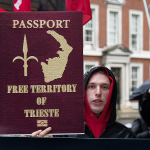 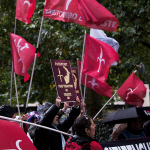 Trieste also has a Free Port/Free Zone, which depends on the activation of the very same laws (Annex VIII to the Treaty of Peace).

Today most of the Free Port of Trieste lays in ruins, yet the Italian authorities, despite having recognised the aforementioned current international legislation in official judicial sentences (2013), are now refusing to act in favour of an actual application on the field.
Law and order need to be restored, in Trieste, in order to allow any kind of development in this crucial multicultural part of Europe.

This refusal to apply the current International laws on the Free Port of Trieste has caused disinvestments, a huge economic crisis that has been lasting for decades, and the loss of approximately one third of the population of the city (today of about 200.000), that thanks to its unique position and natural sea depth could be the main Port of the Mediterranean, if only the current Laws were to be eventually applied.

The now urgent solution for all the complex and long lasting issues of Trieste, its Territory and its Port, can be reached only when the International community activates in favour of the enforcement of the current International laws.
We, the citizens of Trieste, will be there to facilitate this process.

The citizens of Trieste have reached London specifically to let the International community know about their current status of citizens of the Free Territory of Trieste, established by a precise International Treaty (Treaty of Peace with Italy, Annex VI) today fully in force, even according to Italian legislation.

It is worth remembering that the city of Trieste was administered by the United Kingdom and the United States of America since 1947; in 1954, after a Memorandum of Understanding was signed in London, the civil administration of Trieste was given to Italy. This did not imply any change in sovereignty: currently the sovereignty of the Territory of Trieste belongs to the citizens of Trieste themselves.

The citizens of the Free Territory of Trieste have and will be stating this, very clearly, both locally and internationally.

In 2014, the cold war has been over for decades. The Berlin wall has been torn down, yet one small part of the iron curtain seems to be standing and functioning just as well as it has for over half a century.

This legal and bureaucratic obstacle happens to stand in a specific area, which is the only meeting point between the three main European cultural groups (latin, slavic, germanic), effectively penalising on a daily basis the local multicultural and international population.

There’s only one solution to the current illegal status of Trieste.
All member countries of the UN Security Council, especially permanent members like the United Kingdom, the United States of America and the Russian Federation, should urgently request to reactivate the International Laws regarding Trieste, its Territory and its Free Port.

This means putting back the nomination of a legitimate Governor of the Free Territory of Trieste to the UNSC’s agenda, just like an official UN communication confirmed to be fully possible in 1983.
The Governor will, in turn, nominate the director of the Free Port of Trieste.

It is time to start an open, civilised, non-ideological and International discussion about Trieste, or this city and Territory will keep on living in the same human, civil, financial, economic and legal crisis for decades to come.

It’s up to the International community to solve this.
We, the citizens of Trieste, will be there to facilitate this process.