The Free Territory of Trieste

There’s a sovereign country
right in the heart of Europe
you’ve probably never heard about.
For its citizens, as well as for the whole of Central Europe, this represents a unique chance for a “white canvas” on which the best ideas and ambitions can be painted on.

This is the reason why TRIEST NGO was funded, this is the basis of what we do.

This Territory is the crossroad of Latin, Slavic and Germanic cultures, intrinsically multicultural and multilingual, located at the northernmost edge of the Mediterranean sea.
Diversity is the key to it, ranging from weather conditions, which can be warm and calm as well as cold and extremely windy, all the way to cultural features and attractions.
All the best Europe can offer can be found in this small Territory: a solid work ethic, a Central position, great food, lovely weather and the kind of variety you’d expect to find only in a big city.
Today, there are many issues that need to be solved regarding the legal and current status of Trieste, as well as the human and civil rights of its citizens. 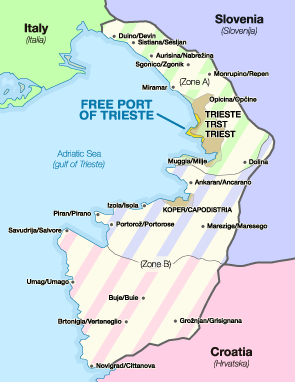 Map of the Free Territory of Trieste

Biggest cave in the World that is open to visitors: Grotta Gigante/Briška Jama, discovered in 1908 and Guinness world record since 1995.
Biggest square in Europe facing the sea: Great square/Piazza Grande (Unità) in Trieste, with an area of 12.280m².

This area of the Northern Adriatic has always been a meeting point of different cultures and civilizations, even in ancient history.
For many centuries the area has been disputed by Venice and Austria, yet in 1295 the then town of Tergeste became a free medieval commune. Since 1382, it has been part of the Austrian empire, while retaining its autonomy. At the same time, most of the surrounding towns and regions remained under Venetian control.
From a medieval town, Trieste became a city. In 1719 the Free Port of Trieste was first established, and in 1769 Trieste was even declared “Free maritime city”. It was a city on the rise, and it has been so until WW1. At the end of which, after more than 500 years, with the Austrian Empire dissolved, the Kingdom of Italy gained sovereignty over Trieste and the surrounding area. This lasted from 1920 until the next World War. During the war, Trieste was conquered by Germany (1943), for a few days by Yugoslavia (1945), and then administered by the allied forces.

From 1954 until today, Trieste became less populated, less active and suffered a complete lack of mid- or long-term strategies for development. This can be seen very clearly today if we consider, for example, the condition of the Free Port of Trieste.

Trieste is not just a simple territory like many others: it also incorporates an International Free Port, regulated by Annex VIII (8) of the Treaty of Peace with Italy.
This Free Zone of approximately 2 MLN m² can offer to any potential investor conditions which are absolutely unique in Europe, as confirmed today by GATT/WTO, Tax Justice Network, the US State Department, and more. Yet most of it literally lies in ruins!
It may be even hard to believe that the only International Off-shore Free Zone in the heart of Europe is being boycotted by its very own administrators, but the following pictures will explain loud and clear how Trieste’s economy has been devastated by this illegal lack of actions.

Right now, the main financial and economic authorities in the world are well-aware of this Free Port/Free Zone/Off-shore Area, yet the citizens of Trieste aren’t in the condition to receive any of the rights and benefits that current international laws guarantee.
As we defend the right to development of all Triestines, the need to enforce these International laws on our Free Port is today of primary importance.
Click here to find out more.

Nothing has changed in Trieste during the last decades.
The population is still declining and the Free Port is not working the way it should. International laws and rights of the Free Territory’s citizens are violated every single day. Multilingualism exists only on paper.
Despite the end of the war in Yugoslavia and the opening of the borders around Trieste itself, the advantages in this area have been minimal, if any at all.
Today there’s a slow but steady — and constantly rising — awareness to be in a special spot in Europe, where diversity means richness.
Yet, anyone who today visits Trieste and its Territory seems to get that distinct feeling, that the cold war here never really ended.
In this uniquely bad situation, the biggest demonstrations in the last decades have sprouted from many citizens (2012-2014), whose questions and petitions have gone completely unanswered by the Italian and local authorities.

It is now time to embrace our differences, while empowering our strengths.
We know very well the current issues and problems of our City, Port and Territory: we have no more time to waste just talking about it.
Now’s the time to start ideating, designing, solving. We exist to facilitate this process.