The embedded value of Trieste

During the last months, many colleagues have showed a growing interest on the so-called Question of Trieste and its Free Port. The topic has always been quite interesting at my eyes and it has come back on the news basically because the age of assistentialism has definitely terminated and the bad consequences are clearly in front of everyone. Therefore, many entrepreneurs are now looking for the full implementation of the Free Port as a chance for economic development and wellbeing. There are in fact many expressions of interest over the topic and several organizations are working hard for this at many levels. Among them, the most remarkable one is TriestNGO, which has been sensibilizing the international community particularly the UN offices located in Geneva. I recently had the opportunity to meet Mr. Stefano Ferluga, the director of TriestNGO, who updated me on the latest activities performed by the organization.

Stefano, what is the status of Trieste?

“Trieste it the capital city of the Free Territory of Trieste (FTT) as defined by articles 21 and 22 of the Treaty of Peace between Italy and The Allied & Associated Power signed in Paris on 10.02.1947 and is also the home of its international Free Port. Both the territory and the port are still today formally under the responsibility of the UN Security Council. Unfortunately, due to the events of the Cold War, the Free Territory of Trieste was divided in two parts – zones A and B assigned to the civil administration of Italy (sub entered to the British-American governance) and former Yugoslavia respectively – after the Memorandum of Understanding signed in London on 05.10.1954. However, the Memorandum was just a gentlemen’s agreement that could neither modify nor prevail over the Peace Treaty. The fact that both Italy and Yugoslavia (and then Slovenia and Croatia) confused their civil administration with sovereignty does not change the provisions of the 1947 Peace Treaty, which instituted a new independent state. Due to our activities, started in 2011, the status of Trieste is now a grey zone where the pretended Italian sovereignty has weakened but still is not enough for the full implementation of Treaty of Peace. 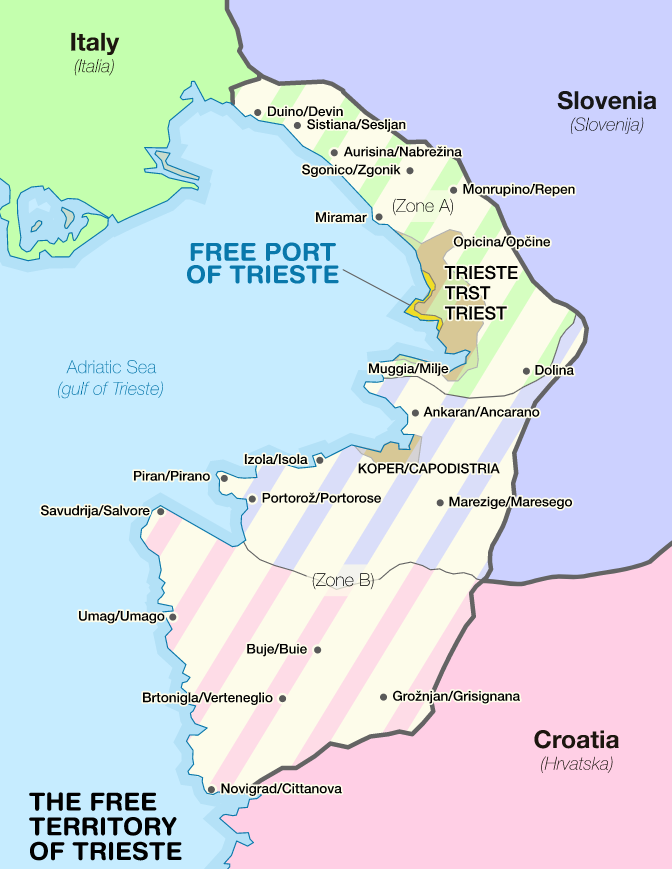 ”That means that the Zone A of Trieste is still today separated from the sovereign territory of Italy?

“Definitely yes, from the Lisert barrier in here it’s just another story. On this point, there are at least two fundamental and undeniable elements: article 22 of the Treaty of Peace that terminated the Italian sovereignty on Trieste starting from 15.09.1947 and article 5 of Annex X that specifies the exemption from the Italian public debt. This means an implicit full fiscal autonomy already recognized by an international treaty ratified by the Italian parliament back in 1952. Finally, we received other several confirmation, like for example the letter signed by the UN Secretary General in 2015.”

What are the advantages for entrepreneurs?

“Unimaginable! We are talking about an independent state entity in the heart of Europe free from any fiscal duty imposed by central governments. One of the peculiarity of the Free Port of Trieste is the financial activity that may be performed within the territory and that should have been started back in 1991 thanks to the offshore law that has not yet been implemented and that would have allowed more than 450 banks and financial institutions to locate within the Free Port. Moreover, this is just one possible Free Port activity. A big opportunity comes from the free manufacturing activity that could be performed in the Free Port in total exemption from the Italian national tax system due to the lack of jurisdiction. Let’s just imagine for a moment the development of Trieste if it were possible to run an enterprise in a tax free status in the area between Barcola and Noghere. The idea is that being in the Free Port is just like being still in the international waters: in fact, the southern border (i.e. the river Quieto/Mirna) was placed in order to directly connect the international Free Port to the international waters of the Adriatic Sea. The dispute between Slovenia and Croatia over the bay of Pirano might be easily defined through the application of the Peace Treaty.”

What are the goals of TriestNGO?

“Our goal is to spread the word over the real status of Trieste and to aware the international community in order to stop the Italian violations, i.e. the right of citizenship (riff. Art. 6 of Annex VI of the Peace Treaty) and the right of economic development (riff. UN General Assembly Resolution n. 41/128 dd. 04.12.1986) generated by Italy which has not been fully applying the provisions of the international law. We are planning to report this to the original responsible governments, i.e. the Central European countries but even Russia, China, USA and UK (the last two are the primary administrators of the Zone A). We participated to several UN sessions starting from 2014 and then we inquired the European parliament. We have then been invited to recent 2019 Intermodal Asia event in Shanghai where we reported once again the status of Trieste. In August 2018 we hosted in Trieste professor Alfred de Zayas, a former UN independent advisor, who unconditionally confirmed our rights.”