This is the extended version of our short speech on December 1, 2017 at the Tenth session of the Forum on Minority Issues organised by the UN High Commissioner for Human Rights/Human Rights Council in Geneva, Switzerland, the theme of which was “Minority youth: towards diverse and inclusive societies”.
This report has been submitted to OHCHR by TRIEST NGO.

Trieste is a diverse and multilingual territory, positioned at the meeting point of the three main European cultural groups: Latin to the West, Slavic to the East, Germanic to the North.
It should be noted that this represents only a potential yet to be expressed, as of today, as the very own survival and sustainability of this Territory is constantly hindered, especially in its zone administered by Italy, by practices that undermine the quality of life, ability to grow up and to find occupation of the young citizens of Trieste. This led to disastrous outcomes, as the city has lost, due to youth emigration, almost one third of its inhabitants[1] in the last few decades. This current condition is not just completely unsustainable, but a direct result of the decision, by the Italian government, to administer this sovereign territory in complete disregard to the International Law currently in force.

Lack of inclusive education in the Free
Territory of Trieste 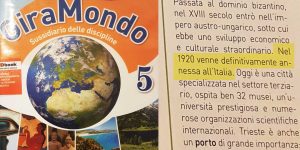 The blatant lies on an Italian textbook, adopted also in the Free Territory of Trieste

In the city of Trieste, which is today administered by Italy, the Italian government is responsible for practices towards young citizens that are against Italy’s own current International obligations.
One clear example would be, for instance, 5th grade widely-used geography textbooks [2] that state that “Trieste was permanently[definitively] annexed to Italy in 1920”. What we know for sure is that, when we consider the actual International Law, there is a multilateral Treaty, the 1947 Treaty of Peace with Italy, which is today in force – and has continuously been since September 15, 1947, which unequivocally states (according to article 21.2 that Italy had then lost any sovereignty over Trieste, without the shadow of a doubt.
Could the Italian government possibly not be aware of this? Of course they are: they have lost a war and were forced by the Allied powers to sign this treaty, which unequivocally gave sovereignty of the Free Territory of Trieste to its citizens, and no other country or government could claim otherwise, as long as this treaty is in force. Yet, students are today being openly deceived, and in doing so the human and civil rights of tens of thousands of young citizens of Trieste end up being violated on a daily basis.

Note: this is not just in violation of the Treaty of Peace with Italy itself, but also contrary to United Nations Security Council resolution n.16 [3].

Therefore, according to the content of this officially approved textbook, among many – in an educational environment where approximately half of the teachers are not from Trieste – the Italian government deliberately negates, in fact, some of the outcomes of world war 2. This is happening right now, in 2017, in the heart of Europe.
And it is not a unique mistake, but something that unfortunately appears to be premeditated and systematic.
Information (or lack thereof) is used, today, as a vector to inhibit youth awareness of human rights, in Trieste. Furthermore, the media environment is very exclusive of part of the citizenry, such as the thousands of Triestines that claimed their human and civil rights during the last 5 years [4], which culminated in major demonstrations [5].

Large demonstrations have been held in recent years

Right now every mass-media outlet is therefore committing, for instance, active censorship of the current International legislation in force over the Free Territory of Trieste, as well as on the human and civil rights of all young citizens that derive from it, such as the right of citizenship and rights of development.Human rights are today eliminated from the public discourse, and in doing so Italy is actively discriminating against the citizens of the Free Territory of Trieste.
We have a situation in which there is virtually no easy way for young citizens to even get to know about the existence of such rights, let alone participate.
Furthermore, the Italian government has intentionally been neglecting the Slovenian language, counting on the fact that in so doing fewer FTT citizens would learn this language that, together with Italian and Croatian, is an official language of this Territory. This, in turn, drastically lowered the competitiveness of the local businesses, hindering even further the local economy.
Under the Italian administration, Slovenian is applied only very partially, and virtually no mixing between languages is currently encouraged: Italian is exclusively used in pretty much all local official communications, while Slovenian is used (together with Italian) only in specific locations where it is spoken by the majority, or in specific schools with Slovenian language as primary. No language mixing in schools is encouraged, and it is now almost impossible to learn Slovenian as a second language for someone who attends an Italian-language school.
This is not what having two official languages (as described in the Treaty of Peace with Italy) means, as anyone who has ever been to a plurilingual territory knows very well. It can not continue: the disregard for International Law over Trieste by the Italian government has become too obvious, and has caused too great of a damage to the lives of young Triestines.
The Italian government, as well as the governments of Slovenia and Croatia, need to completely rethink the way they relate to the young citizens of the Free Territory of Trieste.

Let’s introduce an example of how an evolution in the media environment can change our perception of human rights.
The Free Territory of Trieste is a small piece of sovereign land in the heart of Europe, created in 1947 by virtue of an International treaty which is to this day fully in force.
This simple truth was just nowhere to be found on traditional media, for decades. And it is, even today, almost completely and forcibly removed from the public discourse.
And the fact that all local traditional mass-media were – and still are – run by Italian and Slovenian corporations doesn’t really help. 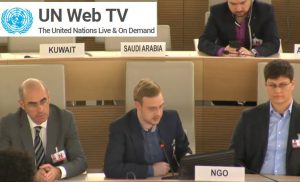 Our intervention during the UN-OHCHR Minority Forum 2017

But something happened, approximately 5 years ago: the actual first-hand pieces of information that determine the specific legitimate human and civil rights of the citizens of the Free Territory of Trieste were published on the internet by some citizens who happened. They were suddenly available to the general population, which began to protest.
What could the reaction of the political and media establishment, to thousands of Triestines asking for their right of citizenship, rights of development, and so on, possibly have been?
Faced with an issue they were completely unprepared about, they didn’t really know what to do.
At first, as some early damage control, some heavy repressive measures were taken, such as some unorthodox accusations of “seditious gathering” made by Italian authorities towards dozens of peaceful protestors [6], with the sole purpose of discouraging more to join the protest.
Yet, incredibly, in the long run the only answer that the citizens are receiving is silence. No precise and convincing answers are given, while at the same time their rights are being – now openly – violated every single day.
It is clear that the administrating governments are now pretending that the issue does not exist, hoping to see the questions of thousands of citizens of the Free Territory of Trieste just spontaneously fade away. It doesn’t work like that. Nor will it in the future, now that large-scale communication has, for the first time in human history, been in part democratised by the Internet.
Answers to the legitimate concerns of citizens should be given in a honest, timely, and exhaustive manner. This is clearly not happening under the current administration of the Free Territory of Trieste, and those who pay the highest price for this are the youngest ones who, being their rights of development systematically broken every single day, face many troubles that could mostly be avoided just by the application of the current International Law; such as a higher suicide rate than the average of neighbouring countries [7] [8], and mass emigration [9] due to the systematic lack of jobs caused by the illegal condition of the Free Port of Trieste, the economic engine of this Territory.

The responsibilities of the United Nations

Without correct information at all levels, there can be no functional democracy. And without democracy, citizens’ rights are of no value. In Trieste today, under an administration that forces children to raise flags and sing the Italian (foreign) anthem in public [10], this is definitely being the case.

It is worth mentioning that the United Nations is not just an external observer to the Question of Trieste, but it is an essential element of it, from UNSC Resolution 16 onwards.

For this reason, we ask the Human Rights Institutions to be aware and supportive of the rights and status of the citizens of the Free Territory of Trieste, which are currently being violated with impunity, and we recommend for the governments of Italy, Slovenia and Croatia, which already have recognised such rights on paper, to apply them immediately to each and every citizen’s life.